British Toad In The Hole

It was a bone chillingly damp day and all I could think of was comfort. After a full on conversation with my friend from London, her accent left me with a craving for British Comfort because believe me, it never fails to provide just that. I grabbed my brolly (umbrella for those unfamiliar with the U.K. slang) and off I headed with appetite in my stomach and a UK state of mind to the Jones Wood Foundry. The Jones Wood Foundry is a hidden gem on the Upper East Side that serves British fare in the historic neighborhood of Jones Wood, before it became the Upper East Side.

The moment I walk in, I take a deep breath and think ‘home’ and this moment; this place is nothing less than a mecca for me. Everything from the smell of the restaurant to the trinkets and treasures evoke memories of Wellington boots, football Sundays and tea-dunked digestives. I hang out with Chef Jason, partner and Executive Chef, where he is already in conversation about the match of the day with his friend and team member Stu. For Jason, the restaurant isn’t trying to carry out a theme, but rather, its his way to be self-expressed, reflecting his childhood in Stratford-Upon Avon, birth place of Shakespeare and his own culinary journey. It’s not about labels and drama, but rather, a place for locals to hangout, grab a beer and enjoy his honest dinner of ‘meat and 2 veg’. He calls his food simple, I call it amazing with slow braises, savory pastries and no-nonsense deserts.

Jason had promised to open his kitchen doors and share a recipe with me and today I was asking for it. I demanded the recipe for his toad in the hole as I have never ventured there from my own kitchen before. Toad in the whole is a sausage that is dramatically engulfed by an oversized Yorkshire pudding (pop-overs) and topped with caramelized onions. The unity yields crispness, sweetness, saltiness and softness. When the next damp day comes around, I say ‘bring it on’. 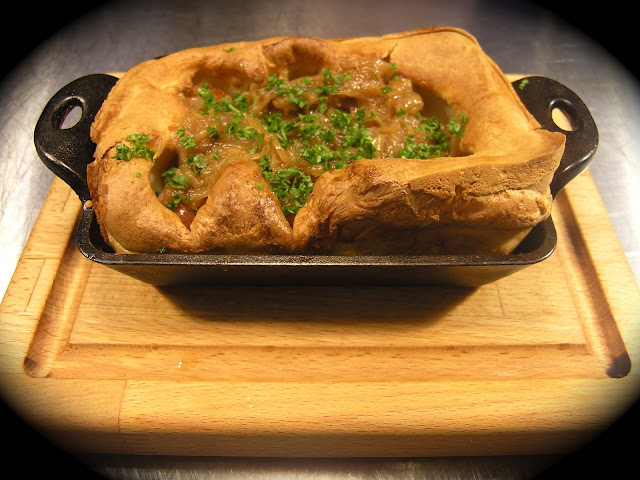 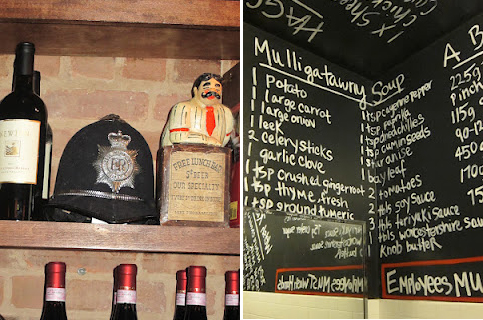 Batter
1) Beat eggs, salt, milk, beer and flour on high speed. Pour through a strainer to remove any lumps
2) Allow to rest for at least 1 hour (12 hours for best results)

Toad in the hole
1) Brown the sausages on a skillet, set aside on paper towels
2) When ready to cook, preheat oven to 400 degrees and heat the baking dish (pyrex glass dishes work well)
3) When hot, add 1 tablespoon of beef drippings or lard. Place the sausages in the center and pout in the batter 2” higher than the sausage. Bake until golden brown and crisp (abt 20-25 mins)

To experiment with sausages other than breakfast sausage will give you a different dish completely. Breakfast sausages or Walls sausages from a local British specialty store have the correct seasoning and will ultimately offer up that true British flavor.