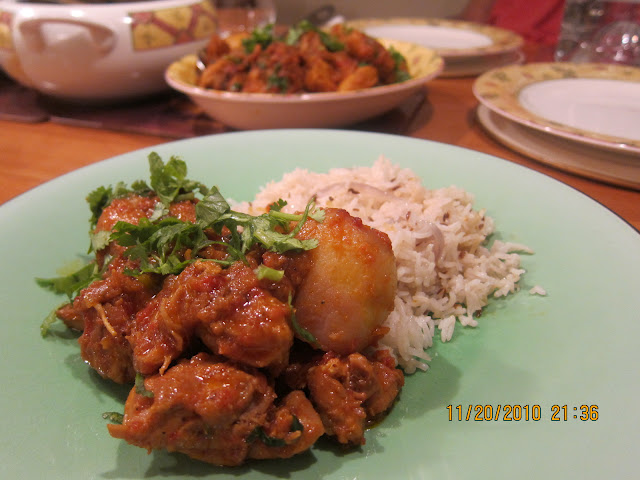 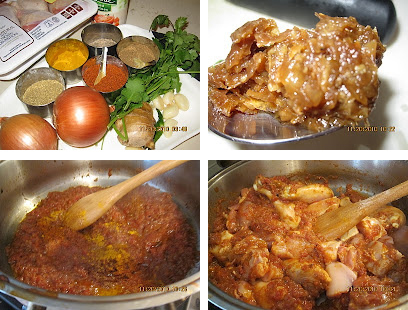 Whenever my mother asks my husband and my brother what they would like to eat, the answer is always the same..Chicken Curry. Knowing how much they both love it and given the simple geographic set up of my family with my parents being in London and my brother and I in NY, it made sense for me to learn how to make it. Well, here comes the big BUT. This was one dish I simply could not replicate. I had tried making this dish whilst she transatlantic-ly supported me over the phone with each step. I failed. I have watched her make it whilst I furiously took notes only to have failed again. Believe me, each time I tried, it felt like this dish was slipping further away. Mum’s dish has a vitality to it. It’s flavorful and has a lovely color. Mine by contrast looked lifeless and often tasted the part too. Send me a sign!! What am I doing wrong? And then it dawned on me. It was pretty complicated actually. I needed to let go and just have fun.

This thought alone gave me so much freedom. By adding a dash of ‘this’ and a ‘sprinkle’ of that, I played with the mechanics until I reached my bliss point. When you are in the kitchen, I invite you to take on the same approach. If you’re not baking a cake, nothing should stop you from tasting and adjusting until you too are ready to serve your dish. My quest for this chicken curry led to the understanding of the inter relationship amongst ingredients. Once you understand this relationship, you view a recipe as a guide and not gospel. Sometimes, it’s less about the measurement and more about the pinch. It’s like love in a relationship, let go, be prepared to make mistakes, play with the flavors. In a sentence , ‘ don’t be so rule based’. Are you aware that no single spice or salt is of the same strength (even if they are of the same brand)? Does knowing that throw you off? Don’t let it!! You are the best judge of what your palate likes. People follow recipes rigidly and then blame poor chefs when it doesn’t quite taste right. Perhaps the tomatoes they used were sweeter than yours or their cilantro stronger in flavor. Don’t look to be spoon fed, rather, look to be inspired.

Now, what’s the fuss about this chicken curry? It is absolutely delicious visually and boasts of so many flavors. This pot of glistening curry has flavors of ginger and garlic, caramelized onions and cumin, coriander seeds and garam masala, garnished with freshly chopped cilantro. Over a bed of rice and a bottle of beer, you will reach more than just bliss point.

1. Heat oil on high heat and add the cumin seeds. As the cumin sizzles, add the onions and fry for 10 minutes and then add the ginger and garlic.
2. As the onions caramelize and mixture becomes golden brown, add the tomatoes (you may need to give them a quick whizz in the blender first) and cook for about 7 minutes. Once the oil separates from the rest of the mixture (you’ll see flecks of translucent orange liquid)
3. Sprinkle in the turmeric, chili powder and salt (to taste)
4. Add the chicken legs and after 6 minutes of cooking, add the 1’ pieces of thigh and chicken breast. Cook covered on medium/ high heat
5. After about 20 minutes, remove the lid and cook on high heat. If you like more gravy, add ½ a cup of boiling water
6. Add the garam masala, coriander powder and pepper and mix well.
7. Throw in the potatoes and gently mix, being careful not to break the potato
8. Garnish with fresh, chopped cilantro

Some people cook the potatoes in the curry itself. I prefer to cook boil the potato separately and then add it to my dish. This avoids the potatoes breaking down too much and forming lots of little lumps.

Saira – your food, photos and writing keep getting better with each post.
Thanks for sharing these wonderful recipes and their provenance, inspiration and what makes them work for you as you prepare them.

Looking forward to enjoying many more posts from you and maybe even getting to taste some of your creations. How do we make that happen?

Want to come visit the farm and cook with me? OR shall we come eat at your table?

Thx Suvir, would love to do it!! You pick a date in Jan after the first week and let me know!!! Would love to have you and Charles over!!

Love your food!! You make it so simple and your recipes actually work! Would love to see some dishes from my home town of Trieste..let me know if I can share these recipes with you. Also, I tried your burger recipe!!!! Yummy and so true on the over loading of condiments…it’s the sign of an insecure burger heheh