Ferran Adria on Peru at the NYWFF 2011: Lomo Saltado 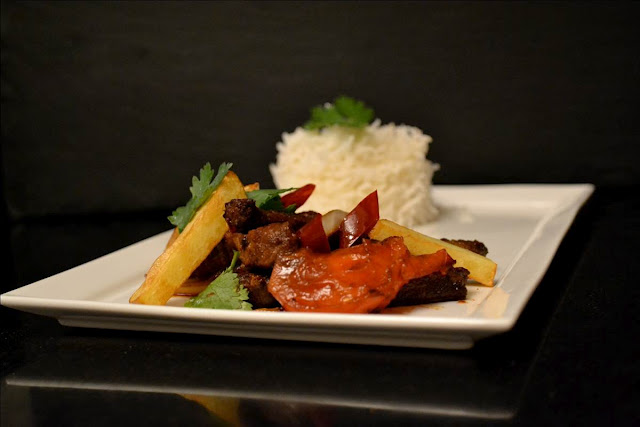 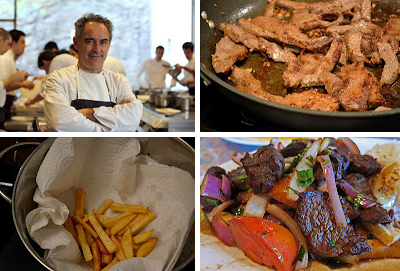 This month was electric in the Big Apple as New York City opened its doors to the New York Food and Wine Festival. The city became a “Tinsel Town” for food with streets and venues filled with well-known chefs talking to the media about new projects, personal philosophies and using their voice as a medium to achieve other goals that benefit society.

My friend Lesley invited me to an event hosted by the Feast.com, an event which left most of the audience speechless and self-reflective. The guest known as the ‘Salvador Dali’ of gastronomy, a rebel with a cause and a scientist in the kitchen, could have been no other than the Spanish Chef Ferran Adria. The afternoon was not spent discussing his famous culinary nitrous oxide canisters, but rather people and their attitude towards food. For Adria, well being is clearly an objective. As he pointed out, over-eating and fad diets are just symptoms of a very unhealthy mindset and a physically ailing society. He also discussed his new book, The Family Meal, which was inspired by his quest to ensure that his staff was eating healthily, affordably and responsibly.

When asked by a member of the audience what advice he would give to a culinary school graduate, he became very serious reminding them that this journey should not be about fame and fortune but rather the craft of being in the kitchen. In his recent visit to Peru, he was humbled by the modesty of chef extraordinaire ‘Gaston Acurio’, where almost every sentence spoken by the chef was prefaced by a ‘con permiso’ or ‘with your permission.’

Ferran spent a lot of time talking about Peru and how we are on the cusp of this lesser-known cuisine exploding onto the global stage. This is a truly integrated cuisine where it’s citizens, are either no longer able or even bother trying, to distinguish the cultural origins of what is on their plate be it Andean, Chinese, Japanese, African or European. Integration at this deep level is something that has yet to fully transpire in the West although in time it will inevitably come and with it, we will all become that little bit closer together as people.

Today’s dish celebrates his championing of Peruvian cuisine and accelerating the recognition it deserves with: Lomo Saltado. Lomo Saltado is a Chinese influenced Peruvian dish of stir fried chili beef, served with fries.

1) Heat oil in a large wok and sweat the garlic. Add the sirloin to the wok (do not over crowd the pan and cook in batches if necessary) and increase the heat. Season with salt. Allow the meat to nicely brown. Remove from pan
2) Heat more oil in the same pan and briefly sauté the onions. Remove from pan
3) Deglaze pan with vinegar and soy sauce and remove the ‘brown bits’ from the pan, add tomato wedges and cook briefly. Season with salt and pepper and add the onions and sirloin with slices of red chilli

1) Blanche the sliced potatoes in boiling water (boil until ½ cooked and remove) and air dry
2) When ready for service, heat oil in a fryer at to 350 degrees. Fry the potatoes until golden brown. Remove when tender and golden brown and dry well on paper towels

1) Heat butter in a saucepan and cook the rice until they become pearl like. Add 4 cups of water and salt to taste and cook covered on medium heat for approximately 20 minutes. Fluff with a fork once the rice is tender

Be careful not to overcrowd the pan to avoid steaming the beef.

I love Ferran!! Lucky you to meet him

Also, I tried Lomo Saltado when I was in Peru, it is so tasty. I tried to make it at home but itwas soggy and sloppy. I will try this recipe as my husband loved it!!

I am like Dean, I fell in love with Lomo Saltado while an ex-pat in Lima, Peru several years ago. I found your rpeice when trying to describe the dish to a collegue and had to try it. The pictures were fantastic! So simple and easily explained that even I could do it. Loved it! Thanks,Al H.Little Rock, AR

Thank you Pappu, I am so glad yo enjoyed it. It isso quick to rustke together, don’t you agree

Question out of the way: what is the screen for?This looks like a very hertay, very comforting plate of food. Beef, onions, french fries, garlic, rice, and butter we’re hitting all the right notes here. Thanks for sharing. I have a feeling our family’s going to love this dish.

Oh yes, it is a winner Henyboy