Madame Likes To Wake Up With A Croque Monsieur

Spending a few months in Poitiers, France, was like being in food heaven. My excessive food indulgences would have made Emile Zola turn in his grave several times, but that was never more than a fleeting thought (he wrote ‘The Belly Of Paris, where he snarls upon the food extravagances of the middle class in 19th century Paris).

My six months could be summed up by the routine of snacking on whole baguettes fresh from my local boulangerie without ‘beurre’ , treating myself to pistachio, lavender and raspberry macarons, always ordering my potato dauphinoise and going through the ritual of being told that it would take an extra 30 minutes. So many delights, yet only 1 favorite , ‘The Croque Monsieur’.

Would I offend anyone to say that only the French could turn this ham and cheese sandwich into a seductive masterpiece? The collective spirit of the crisped bread, the sweetness of the ham, the musty contribution of the gruyere and the slathering of béchamel makes this sandwich a treat to wake up to any time. All you need now is some piping hot coffee and some French music by the likes of Edith Piaf to make you part of that ambience parisienne. 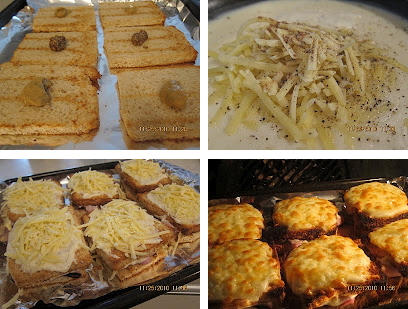 1. Heat the oven to 400 degrees
2. Toast the slices of bread until slightly golden
3. In a pan, add the butter and flour on medium heat, stirring constantly for 3 minutes. Gradually pour in the milk and allow the béchamel to thicken. You’ll know it has reached the desired consistency by making fork lines in the sauce without them disappearing. Remove from heat.
4. Add about ½ of the cheese, the nutmeg, salt and pepper
5. Lay your toast on an oven tray and smear with half a teaspoon of mustard (I make some sandwiches in Dijon and some in wholegrain.)
6. Lay down your ham and sprinkle with 1/4 of the remaining cheese.
7. Spread the béchamel on the toast and place faced down on the ham and cheese.
8. Spread the final layer with a tablespoon of béchamel sauce, and sprinkle with the remianing cheese
9. Place in the oven for about 5 minutes. Once the cheese has melted, switch the oven to broil/ grill until it is bubbly and brown.

1. Throw on a fried egg and you will turn Croque Monsieur into Croque Madame
2. Serve with a salad and this dish works wonderfully for lunch or dinner

Don’t be concerned if your toast seems dry in the initial stages of putting the sandwich together. The béchamel sauce softens the bread as much as is required.

Some of my favorite tabletop pieces come from Poitiers. Emile Henry has a studio there I believe. Will have to check on that.

How lucky you are to have spent that time there. What took you there? Tell us more.

Thanks for this recipe. Even better if you will come make them for me at our farm kitchen. Any interest? We can then both blog about that experience.

Your writing is wonderful. Thanks for sharing!

Thx Suvir, it would be an honor to cook at your farm!!! Early next year would be great!!!

Urban Cow girl, if you believe in a little effort for breakfast, then let this be it!!! I