More Than Burgers On The Barbeque Please!! 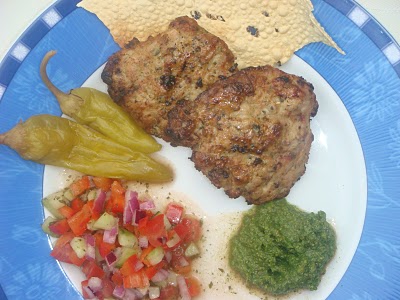 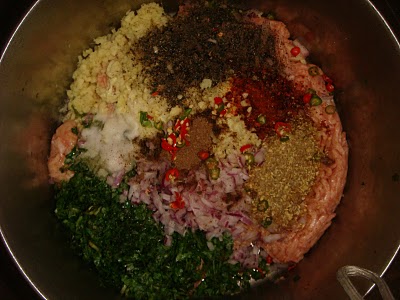 Who likes barbecues here?? No, really, apart from the social aspect, who really likes what they are eating?? Throwing down a few burgers and potatoes over hot flames just doesn’t do it for me (they inevitably turn out hard and overcooked!). Is it safe to assume that there are some of you out there for whom it doesn’t work either?

Being back in London for the summer, how could I forget how amazing barbecues can be? My aunty Rupa and Shoky uncle have totally nailed this world of otherwise excessively-charred food. Featuring a combination of seasoned meats, Ottolenghi inspired salads, kuchumber (finely diced tomatoes, onion, cucumber soaked in lemon juice, salt, and fresh chili), ‘soft-as-a-pillow’ naans, and raw mint mango chutney, one is left in a food coma….but it is totally worth it.

My favorite is the ground meat chicken kebabs which are cooked in their clay oven. When I make it in my New York city, fire alarm-sensitive apartment, there is clearly no tandoor. I make it in the broiler and it tastes very similar to grilling it in the tandoor or barbecue. Just as cooking the kebabs outdoors, the broiled kebabs also come out of the oven sizzling and slightly crisp on the outside and yet remain moist from the inside.

We all have our own ways of eating kebabs. Some roll the kebab, kuchumber and chutney in a piece of naan and eat it as a wrap. Some break the kebab and naan with their hands and dunk pieces into the chutney but me, I like the kebab straight up with my condiments on the side. O.K., my mouth is watering and it’s only 9 a.m. as I am writing this. Whenever I get back to NY, I refuse to keep this tongue tantalizing moment as just a memory. I don’t just melancholicly throw my arms up and wait for my next summer trip to London. I don’t wimp out. I simply turn on the broiler and recreate and its pretty damn close!!

1. In a large mixing bowl, add all the ingredients and mix thoroughly
2. Preheat the broiler on high
3. Divide in to 16 balls and slightly press down on each ball to form the shape of a burger (you can also make them into the shape of a sausage)
4. Place in the broiler for 15 minutes, turning the kebabs after the first 10 minutes. Again depending on your oven, check one kebab first to ensure it is not pink inside and cook for longer if necessary (unlike red meats, chicken must be fully cooked)

The kebabs can be served with kuchumber (chopped salad of onions, tomatoes and cucumber) dressed in lemon juice, mint, chili, salt and pepper and a piece of naan. On occasion we also eat this stuffed in a lightly toasted pita bread or burger bun.

1. I am an advocate of food processors but refrain as much as possible from dicing your onions in them for this dish. The onion has a fair amount of water content and when cutting it in the processor it becomes liquidy and makes the kebab mixture very watery.
2. After making the mixture, rub a little cooking oil on to your hands before you make the patties as it makes it easier to handle the ground chicken.
3. When you are turning the kebabs, baste them in the extra juice in the baking tray and then discard the remaining juice, this will make the kebabs taste as if they have been thrown on the barbecue and not into a pot of hot water.

This is my all time favorite! On a burger bun… in a wrap with hummus or with naan and salad.. Easy..healthy and delicious!
Fabulous job Saira…
xx sonia