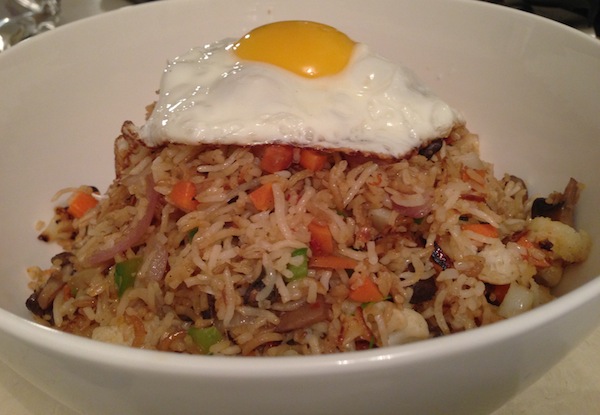 When it comes to Asian cuisines, in my home, we are equal opportunity eaters – Indian, Thai, Japanese, Malaysian – you name it and we’re there. Last Friday, my refrigerator action was in the hands of a sad carrot, scant baby bella mushrooms, a laquer-dly green bell pepper (why do I bother with those?) and a couple of eggs. It was time to pull inspiration from my Asian flavors and transform these loners into a cohesive dish through purpose and intention rather than neglected souls drawing their last breath in a dish.

I thought of making fried rice but just a little different. Rather than cooking neat separate grains that shuffle evenly amongst the vegetables, I was thinking of being more Bim Bim Bop (Korean deconstructed rice) about the dish – . sautéing the rice on high heat so it sticks together in places and forms a crust and throwing on a sunny-side egg. Once all the vegetables were steamed or wokked up, they were pulled out and reserved until the steamed rice was finished. And what a finish! The soft white grains were given a searing in sweet thai chili sauce (often called chicken sauce as it is served with bbq chicken), the veggies were thrown back in to the rice with a rough comb through and the dish was served volcanically hot with a fried egg on top. 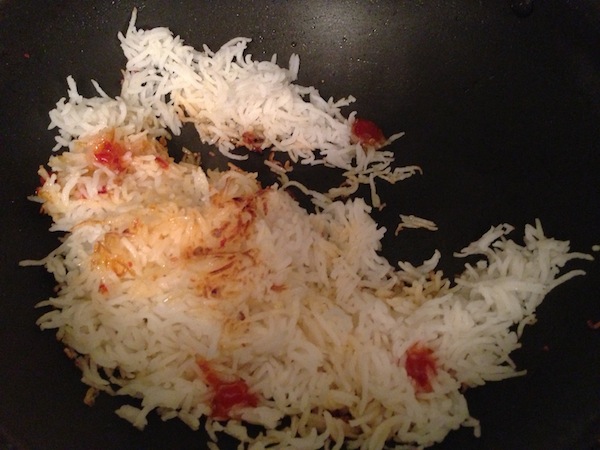 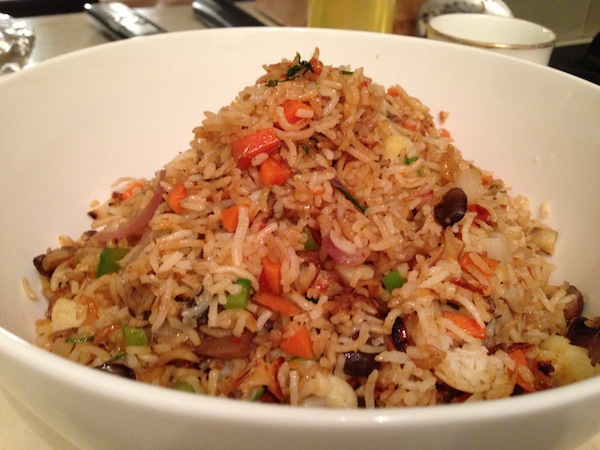 My dining companions were pulled-in by the drama of the presentation (funny how a frilly fried egg could do that). They proceeded to make the dish their own as they broke the fried egg in to the rice, partly spooning the yolk in to there mouth and partly using it as a dressing for the rice. 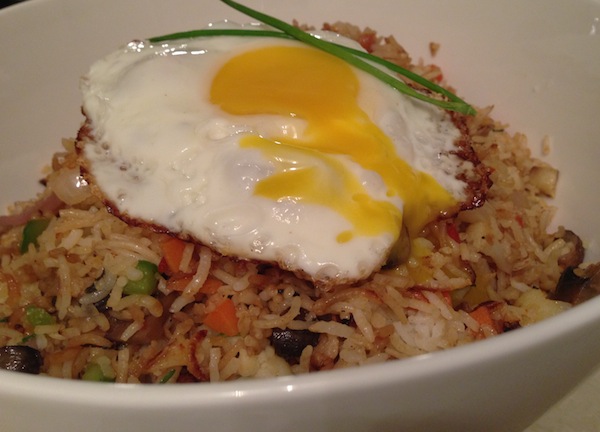 Breaking in that yolk

¼ cup of green beans or peas

Eggs (one per person)

1)   Carrots: Bring a large pot of salted water to boil. Cook the carrots until barely tender. Drain. Refresh in iced water for 5 seconds, drain and set aside. Cook green beans or peas in the same way

2)   Saute in cooking oil separately the onions for 2 minutes on high heat, then the mushrooms and then the green peppers – Sprinkle salt on each and set aside

3)   In the same pan, heat the cooking oil and ½ a tsp. of sesame oil. Add half the chili sauce and soy sauce. Saute half the ginger and garlic, add half the rice and allow it to brown from the bottom to form a golden crust, turning in places. Cook the second batch of rice  the same way. Consolidate the rice back in the pan

4)   Throw in all the vegetables, onions and scallions and roughly combine. Check for seasoning