Ok, I have been a little quiet the last couple of weeks. For those of you who don’t know, I was asked to compete at the Varli Food Festival cook-off. The Varli  Indian Food Festival, that rolled out it’s first ever food festival last year in NYC has certainly made its stamp on the culinary map.

This year, the event was kicked off with Padma Lukshmi, host of Top Chef, as she introduced the evening.  The night was young and spirits were high and The Metropolitan Pavilion never looked more beautiful.

Nothing less than a wonderland of Indian food, panache seemed to be the prevailing theme behind the chefs creations with Chef Jehangir’s Zucchini hummus pizza, Heritage of India’s butter chicken with basil pilaf and of course Chef Prasad’s Butter Pepper Maine lobster with Himalayan Pink salt  and cilantro micro greens.

Yet for some reason, I couldn’t fully focus. The next day was the Varli cook-off, judged by very illustrious names in the business and hosted by none other than Iron Chef Contestants – Maneet Chauhan and Jehangir Mehta.  I was one of the eight contestants.

I was nervous but the victory was in putting that aside for a few hours. In the bigger scheme of things, what an opportunity! There I stood at my cooking station listening out eagerly for the first round’s mystery ingredient. It was shrimp. I love shrimp, but could I get the judges to like mine. With a few initial glitches of not knowing how to turn on the stove, it was ready, steady and COOK. Inspired by North End Grills ‘black pepper shrimp’, I made my own spin using the ingredients available to me. I butterflied my shrimp and reached for spices to make my dry rub. Breakdown 1: There were only black peppercorns and no equipment to break them down. I tried to break them up using the palm of the pan but those rascals wouldn’t ‘give’ – instead, they dispersed all over my station and floor and started to make me look and feel very clumsy. I substituted with carom seeds for the heat to which I added coriander powder and salt. I made 4 portions on a bed of citrus salad and ready to be judged. The judges feedback – nice presentation but too salty. I tried it and my mouth felt like it had been plunged in to Antarctica’s saltiest lake. The Verdict: I made the cut for round 2!!

When the final round came about, we were all relieved to know that chicken was our secret ingredient.  I planned my dish and was on the road to make Kung  Pao chicken with steamed rice. All was going well, but then in this world, there are no free lunches. They threw a spanner at us and we were told that we had to use Mango pickle in the dish. Mango pickle, unlike mango chutney, is very sour, pungent and only shines in the presence of bland dishes. Great! Kung Pao met it’s Anti-Christ. Luckily, there was salvation and it came in the form of eggs. I would dress my steamed rice with a fried egg that had been cooked on a thin layer of pickle. The result: I was happy. I executed all 4 plates in a timely manner and the plates looked pretty.The Verdict: It was a narrow call, but I won. I took that golden beauty home and haven’t stopped staring at it since. 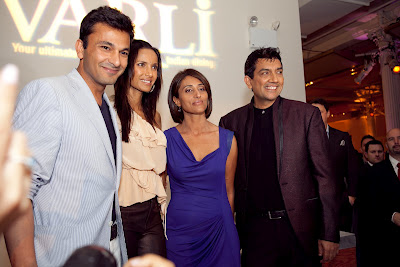 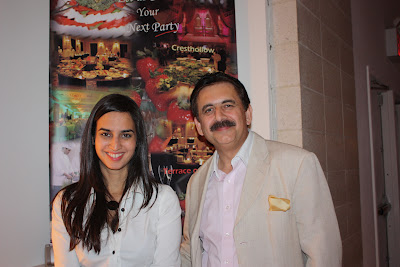 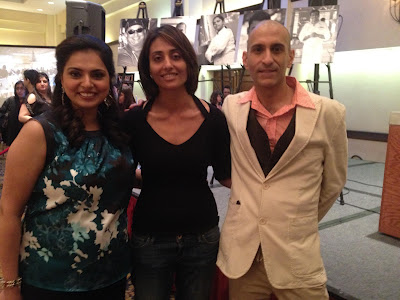 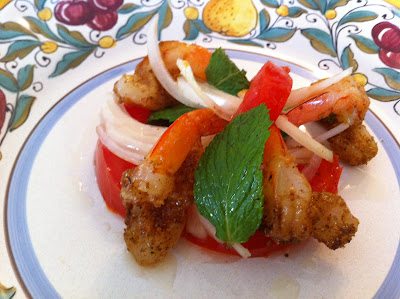 Shrimp
Heat the pan with 3 tbsp oil
Coat the shrimp in the dry rub of coriander seeds, chili powder, salt
Add shrimp to hot oil for about 3 minutes until they turn orange, promptly remove and drain on paper towels

Nothing else is required with this appetizer

Do not over cook shrimp. As they turn orange, pull them off as they continue to cook in their own heat

Congratulations for winning the Varli cook-off. I am going to try your Kung PAO iNSPIRED cHICKEN SOON …

Thank you Bhupesh. I would love to hear about how it works out and let me know if you have any questions 🙂