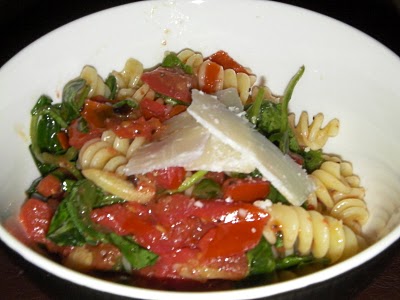 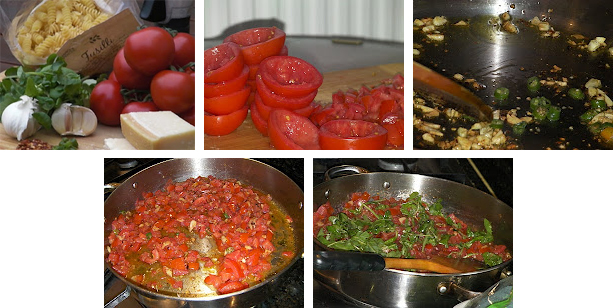 The past few days, I have felt like my palate has been receiving very predictable flavors. Whilst everything has been well made and full of flavor, it just hasn’t been fulfilling. I felt like I needed to trade cumin for perhaps basil or parsley. I couldn’t quite put my finger on what it was. Then I started thinking of summer and all of a sudden, my mind felt like a school blackboard with a spider diagram sprouting all kinds of summery words…’bikini’, ‘sunscreen’, ‘chilled lemonade’… NO NO NO.. not even close.. and then I had my aha moment.. ‘TOMATOES’!!!.. YES!! TOMATOES!!! I didn’t want something rich and heavy but then I am not exactly a candidate for gazpacho either. I felt like a light and fresh tasting summer’s pasta was on the cards.

If you haven’t noticed already, the use of the word ‘summer’ has been gratuitously thrown around by me, but just one last comment on summer. Summer is the time when tomatoes take the center stage. They are sweet and juicy and some people even eat them as a fruit. So what’s the bottom line? It is a crime to overcook your tomatoes and bad karma (a little dramatic perhaps). Getting back to our dish, this light summer’s pasta has a real flavor of the Mediterranean. Crushed pepperoncino (dried chili flakes) and plenty of garlic sizzling away in hot olive oil was only the beginning. The tomatoes also exceeded expectations and added tang, sweetness and bursts of juiciness. I wanted to add something else to the dish but didn’t want it to dominate the natural flavor of the tomatoes and garlic. I felt rocket and watercress would do the trick without being omnipresent in every bite. These leaves added another dimension of flavor given their peppery and sharp taste. The tomatoes were removed from the heat when they barely began to soften and the greens were added after the dish had been removed from the heat, wilting very slightly. Having talked about the sauce so much, I must tell you that pasta was not left neglected…I couldn’t afford to do that since it was after all a ‘pasta-al-fresco’ dish. This al-dente pasta tossed in the tomatoes and greens looked like summer on a plate.

This pasta-al-fresco dish can be served warm, but given that most of us are trying desperately to eradicate our inner heat from this heat wave, I prefer it at room temperature. If some of you read the pearls of wisdom section after you have cooked this dish, this one is for you: please have all your ingredients prepared before you start cooking as this dish cooks within 10 minutes and you don’t want to have to scramble to keep up.

Pound and roughly chop the de-skinned garlic cloves (pounding the garlic a little first makes the juices seep out of the garlic, bringing out the intensity of flavor)
Chop your tomatoes in ½, pull out the seeds and the fleshy part around the seeds and then dice
Set your pasta to boil (follow instructions on the pasta box)

Heat the olive oil in a large size pan (if you use a small pan, the tomatoes will get mushy later on)
Add the garlic and the dried chili to the oil and cook until the garlic is golden brown to really flavor the oil. (The oil will also turn a light red saffron color as the dried chili cooks in the oil)

Add your green chili and after a minute add the tomatoes
Delicately toss the tomatoes and olive oil mixture on medium heat and cook until the tomato just begins to soften. Be careful not to overcook the tomatoes or stir excessively, this will break the tomatoes down too much

Add 3 large handfuls of the rocket and watercress and gently fold the mixture. The greens will wilt slightly in the heat of the sauce.
Toss with sauce with your pasta
Finish it off with sprinkle shavings of parmesan

But of course, a glass of wine
Serve at room temperature

1. Wash and chop your ingredients before cooking
2. If you skip the deseeding of your tomato step, your dish will become watery and the seeds sometimes lend bitterness to a lightly cooked tomato dish
3. Be thoughtful when cooking the tomatoes so they don’t become mushy and the skin separates from the flesh
4. If the tomatoes are out of season, add ½ a teaspoon of sugar to remove the sourness
5. Mix the sauce and pasta just before serving or the pasta will absorb the juices of the sauce and swell up

This looks sooo good!!!! Always on the lookout for good vegetarian dishes…