This summer has been quite eventful. The plan was to spend three weeks in London, but known for his spontaneity, the hubby decided to whisk us away to Dubai. The UAE certainly knows how to pamper it’s visitors and the city does not fall short of any amount of indulgence.

One can get carried away by the execution of mammoth concepts in Dubai which often leave you in wide-eyed wonder. You name it; skiing in this furnace land, seductive fountain dances reaching heights to make a skyscraper blush, Aquariums showcased with couturier flair – and that’s only the beginning of it all.

The city aims to impress and even those who resist its charms (often holding the simple view of it being a man-made paradise) eventually cave in to its beckoning ways. At first blush, all seems glammed up here, but delve deeper and you will see that this Emirate is the love child of futurism and the Nomadic Middle East.

To get a feel of the old world Dubai, head to the Creek and catch the Ubra, a squeaky wooden boat headed for the gold and spice souks. I imagined that this would be a ‘made for tourists’ market where we are fooled in to thinking that this is indicative of local living. I was so wrong. This was the real deal where hardcore spice merchants conduct wholesale and retail activity. Sacks after sacks of dried confetti like flower petals to be used in teas, deserts and rice; bags of dried lemons, berries, turmeric, ginger and garlic with aromas unrecognizable to me and chartreuse complexioned pistachios later to be crumbled over a desert or crusted on some meat. 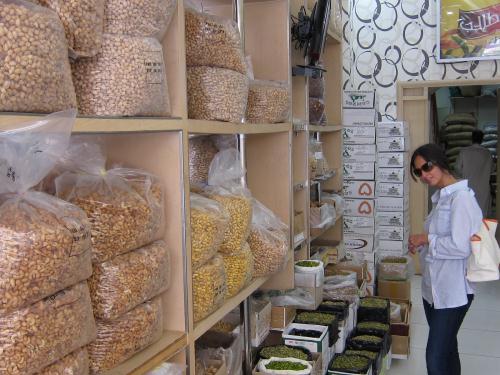 It would be a crime to go there and not sample and purchase with a sense of abundance. Now, back in New York, thanks to my visit to the Spice Souk, my pantry is filled with all kinds of spices and nuts. One of the dishes I thoroughly enjoyed on my trip was a pilaf with pine nuts and vermicelli and was served as a side to most entrees. This dish is judged more than anything else on the plate. It must be moist but not mushy – just single grains of rice that fluff up as you run a fork through the pot. The pilaf is buttery, toasty and aromatic and can quite easily be eaten as a standalone dish. 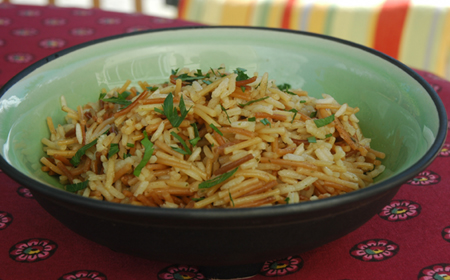 1) Wash and soak the rice in water for 20 minutes
2) Warm half the butter in a pan until it turns light brown. Cook the onions on medium heat until they turn caramelized and browned. Add the vermicelli noodles to the pan and toast until they turn golden
3) Strain the rice and add to the noodles, coating in the butter noodle mixture
4) Add the water and salt, bring to a boil, cover and reduce to a simmer and cook until all the water has been absorbed . Fluff with a fork
5) Saute the nuts in a separate pan with the remaining butter until it is toasted combine with the pilaf

This looks delicious! I am definately going to make this.

Thanks Ginny. You can also use cashews if you don’t have pine nuts on hand. Both the nuts are on the sweeter side and work well