Being a British born Indian is not something I ever thought about until I left it’s windy shores. The aromas on the streets, the curry flavored chips in the grocery stores (targeting the British population of kids), an array of Indian microwave meals (perhaps not the healthiest of choices) and best of all – PUB CURRIES.

My friend and well-regarded Chef, Jason Hicks (remember that Toad In The Hole story?) mentioned that a real pub would always have a ‘mean’ curry – something that he had always wanted to bring to his menu. As I spoke to more and more British expats, I realized that they all missed the ritual of a ‘beer and a curry’. The local Indian joint was a quick fix but not a replacement for what their palates had cultivated a taste for. Anglo-Indian curries are different. Whilst they use the same ingredients as the authentic Indian dishes, it is a completely different calculation of flavor. In the Anglo-Indian dishes, spices are coaxed to a lesser extent, fresh ingredients are given a more gentle treatment, there is a heavier usage of nut pastes, cream and coconut milk and in addition to using dried fruits, there are also hints of British ingredients that would be highly uncharacteristic in an Indian dish. Overall, the dishes are milder with movement of sweet and spice in tandem with one another. However, the Brits don’t wimp out when it comes to heat levels and there are certain dishes that are made even spicier than their originals, such as vindaloo.

There was clearly a gap that needed filling here and after my conversation with Camilla, the idea crystalized. It was time to bring these pub curries to the city – in a pop-up kind of way, it would be called ‘The Curry Club’. A few months later, the series was launched. The first Curry Club is taking place as we speak at The Jones Wood Foundry in collaboration with Chef Jason Hicks. The concept made a place for itself in the New York Times as well as many other media outlets. To name a few:  Time Out, Gothamist, Serious Eats, Village Voice, Strong Buzz. Each Monday for the month of November, a popular British curry will hit the menu. Last night we did a Goan Shrimp curry topped with fava beans and served with rice pilaf and artisanal rosemary naans hand made by Tusi NYC. Of course, no pub curry would be complete without popadums and chutneys – our chutneys, if I may brag, were homemade tomato and mango-ginger. ‘Smooth with a gentle hum of spice’ was how patron, Carmen Taton, described it – We’d like to agree with you Carmen. 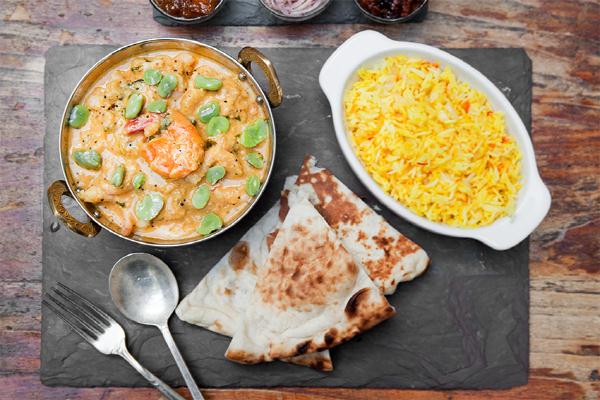 Butter runner beans, ½ a cup, boiled, shocked and skins removed (with a gentle rub, they slip right off)

A few sprigs of cilantro

1) Heat oil, sweat garlic until soft, add shrimp shells and sauté until they turn red. Add wine and remaining ingredients and reduce until it is like syrup. Add 4 cups of water and reduce by half. Strain and reserve stock

4) Add coconut milk and reduce until it coats back of a spoon (like green curry),

Toss the butter beans in butter and a pinch of salt. Chop the cilantro and use both as a topping for the curry