Today is the launch of unsworn. Witness how chefs become unsworn to secrecy and unravel a recipe as well as a kitchen tip. Today’s unsworn takes us behind those clandestine curtains of Cipriani’s on 5th Avenue and in conversation with executive chef ‘Piero Minicucci’.

Showing up at his kitchen, I was a little concerned as our prior conversation on the phone was ad hoc (for which I was wholly responsible). However just a couple of minutes in his kitchen, I realized that Piero was anything but ad hoc. He was fully prepared. The assortment of ingredients in preparation of his final dish lay in a logical sequence. Like a true technician, he was meticulous and ready to execute. Piero’s choice of dish hit the spot for this furnace of a day: Salmon carpaccio with a lush bouquet of radicchio and green and white asparagus. These wafer thin slices of fish were mildly sweet yet salty, slightly grassy yet vibrant and served with a full bodied salad.

So what brought this chef to New York? Once a little boy running through the peaceful hills of Marches, Italy he is now a chef in one of the most unforgiving food capitals of the word: New York City. What brought him here? Did it all really stem from that little boy who made gnocchi with his grandmother to avoid Sunday Mass? As they say behind every successful man is a woman and for Piero, it was none other than his Nonna Olga.

Join us today as he shares his recipe on salmon carpaccio and don’t miss his secret from the kitchen. 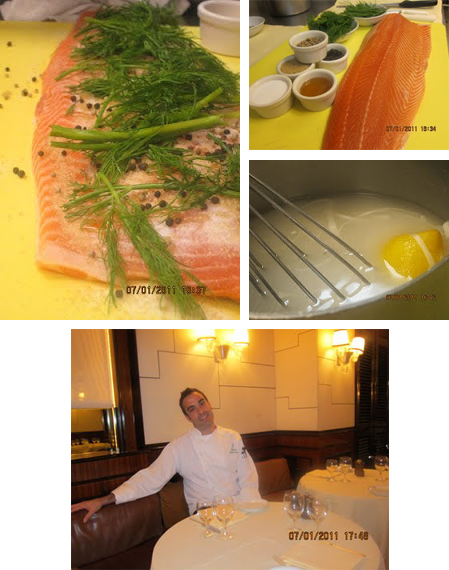 1) Sprinkle salmon flesh side up with salt and sugar. Drizzle the honey.
2) Sprinkle with black and white peppercorns and lay sprigs of dill and chives over the top of the salmon
3) Cover the fish with parchment paper and lay weights on the fish (such as canned tomatoes) over the top. refrigerate for 48 hours

1) Trim asparagus ends and peel the stems. Reserve the peels of the white stems
2) Green asparagus: Blanche the asparagus by cooking in rolling boiled and salted water. Place in ice bath when tender. Remove on paper towels
3) White asparagus: Create a bleaching solution by bringing the flour(mix a little water with flour and then combine with the rest of the water to avoid lumps), water, lemon juice and lemon, salt, asparagus peels to a boil. Add the asparagus and cook until tender. Shock in an ice bath and drain on paper towels.
4) Chope the asparagus into 1” pieces on the bias
5) Thinly slice the radicchio and toss with the asparagus in a the olive oil

1) Grill the pieces of whole wheat bread and serve with the plate of sliced salmon. Stack the salad in the middle of sliced fish.

Piero often cooks vegetables that oxidize (go brown when cut) in a bleaching solution to prevent them from losing their color, such as the white asparagus, artichokes

Wow! What an insider treat to get this recipe!!!!!
I cant wait to try this – but what am i comprimising if i dont refrigerate for 48 hrs?
Unfortunately, I dont always plan that far in advance.

This looks so delicious!!! cant wait to try it.. I have to admit I was a little intimidated looking at the pictures – but now reading the recipe.. I think i can do this!! Thanks… So exciting to meet a NY top chef.. This series is kind of like "real chef's of new york".. Keep them coming..
Sonia xx

Sounds so simple to put together. Any ideas about leftovers? Quesadillas?

This dish looks amazing! Definitely a must for my next dinner party. Thanks for sharing! – Melissa