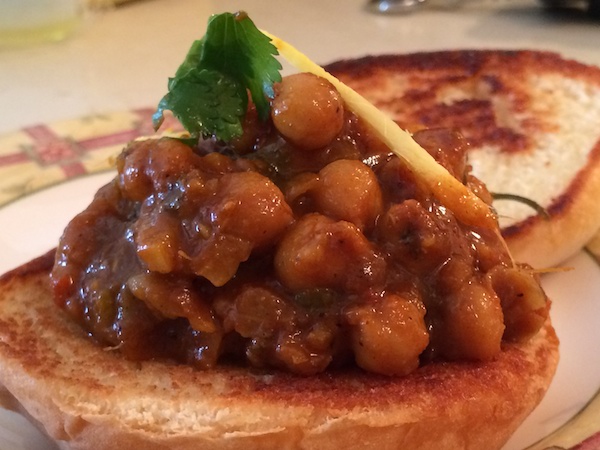 Apart from chicken tikka masala, another popular dish at the Indian joints is Channa Masala. Whilst the former dish can be a little questionable at times, Channa masala is often bang on target. Some call this a chickpea stew – I call it comfort that’s just a couple of cans away. The sauce, unlike a stew, is full bodied that is wet enough to eat with rice and stiff enough to spoon on toast.

I say ‘cans’ away because using a pressure cooker leaves many people in the dark. Besides, canned-chickpeas, unlike many other canned foods, actually taste the way they should, especially when given a good rinse under running water.

Channa Masala is one of those dishes that even has the carnivores attention. The channas are simmered in a tangy sauce that becomes thicker and latch on to each ball, turning them a few shades warmer. As for the sauce, pay a little attention here to get the onions nicely browned and allowing the oil to separate when you cook the tomatoes out. What makes this gravy different to other saucier Indian dishes? It’s a different kind of sour – sourness generated from dried-mango powder amchoor and tamarind paste. I know this may require one of those seldom trips to the Indian market, but it’s worth it and I promise to help you find other uses for them.

Make a bunch, because they taste even better the next day. With a side of rice or a toasted-bread roll and some freshly sliced ginger, you’ll be in a good place. 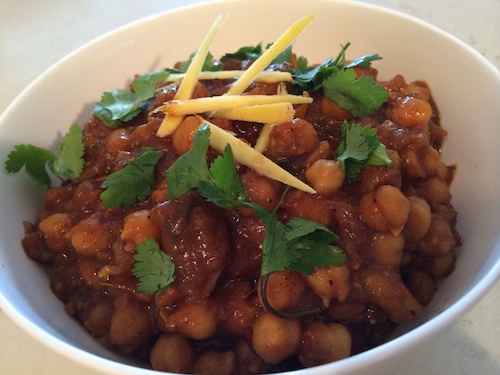 1)   Heat oil, when hot, add cumin and cloves. When cumin turns redder, add onions and green chili and cook until the onions become crisp and brown around edges. Add ginger and lightly brown. Add the dried spices except for the coriander powder and garam masala and cook for 2 minutes to open up their flavors. Add tomatoes and cook on high heat until oil separates

2)   Add the tamarind paste (loosened in 1 tbsp. water) and cook for another couple of minutes. Add the washed and drained chickpeas and water. Bring to boil and reduce to simmer. Cook on medium heat for 40 minutes until  the sauce thickens and coats the back of a spoon. Add the sugar and cook until it fully dissolves