France is getting busy. And why not? After-all, this Saturday is one of the most important national holidays of the year for them. It is this July 14th back in 1789 that brought democracy and freedom to it’s people, a time when the aristocracy fell from grace and were forced to surrender their all-entitled ways, The French Revolution was in full swing. No longer was a man confined to a predestined future regardless of his social standing, life was now giving way to merit and equal opportunity. July 14th, the day liberty was found is also known as Bastille Day.

Fast forward to 2012, the Champs Elysees will be lined with kids sitting on their parent’s shoulders, the elderly and the French youth as they watch the procession marching down the wide street. The French don’t acknowledge the event from a simple festivity point of view, but rather, are fully immersed in the history of it all. They remember the works of Voltaire, Beaumarchais and Didierot and they discuss it and what times were like at the times of Louis Quatorze.

Across the pond, right here in NYC, the same conversations are taking place at French café, Le Moulin A Cafe. The café has a subtle entrance and feels like you have just ‘stumbled upon it’ the way you would in the streets of Bordeaux or St. Paul De Vince. It is home to the French, Francophiles and the local community. No gimmicks, no fuss, just simple rustic furniture, some really great pastries imported from France and a mélange of newspaper readers, morning re-groupers and people catching-up over a cup of coffee and morning politics.

This week there is an unusual addition of color to the otherwise ‘antique white’ café through flags and streamers. The vibe is similar to that of July 14th’s Champs Elysees. Why of course, with a holiday this important, café partners N’Diaye, Colonna and Lecuq didn’t want their NYC French community to miss out whilst wanting the local community to be part of something that is so important to them. They will be celebrating Bastille day the whole week and what better way than to do it with pastoral cheeses, charcuterie and a glass of Cote Du Rhone?

I have spent my morning performing my case study on all things Bastille and have had to taste a variety of cheeses and meats, what can I say, it comes with the job!

Why not jump on board and celebrate Bastille day too. If you can’t get on a flight to come to Le Moulin A Café, here is how Lecuq put the meat and cheese board together with some of his tips and details:

Never display an even number of cheeses. They should be one of the following: 3, 5 or 7.

Follow the sequence in order of: least to most sharp 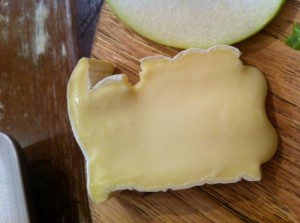 Lecuq suggested a cheese from Normandie (produces the Grand Cru of all cheeses). It is a soft camembert which continues to ripple and drip on the board as you speak. 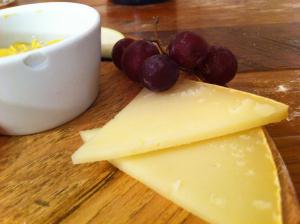 Franche Comte – a hard cheese with a notch up in strength. It is made in the Fort Des Russes, a military bunker. 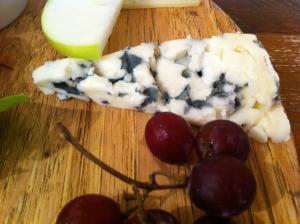 My shining star – Roquefort. With it’s distinct blue ash that has been collected from caves and mountains, this cheese sends the palate to a frenzy with its sharp, salty and sour edge. 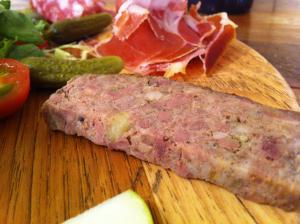 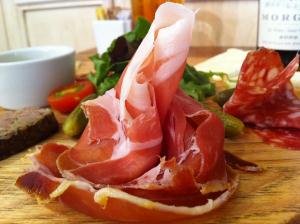 Prosciutto di Parma and not Prosciutto Parma (a huge difference, the former comes from Parma, Italy and the latter does not) 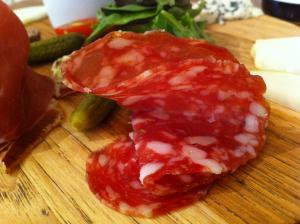 A salami spiced with fennel

Merci,
I live in the neighborhood and had a wonderful time there. I agree, the roquefort was great!!
Thank you for writing about a holiday that is so important to us.

how did i miss this post???
i’m always at a loss when i’m putting this together – this is excellent!!!